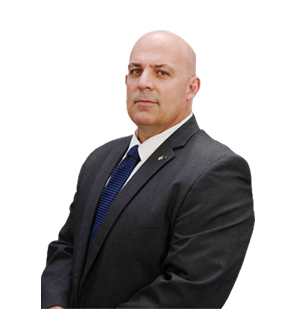 When you have been accused of a crime or suffered an injury caused by the carelessness or intentional act of another person, your choice of attorney matters. Attorney Eugene “Gino” Fimbianti offers clients the benefit of his broad and diverse legal experience. He has over 20 years of experience working in various areas of the law.

A Chicago native, Mr. Fimbianti began he career in law enforcement when he became a police officer in 1990. As a police officer, he served as a patrol officer, tactical officer and detective. He also has received specialized training and served as a Juvenile Officer, Street Gang Specialist, Field Training Officer (FTO), FBI Certified Firearms Instructor, Accident Investigator, Defensive Tactics Instructor, Firearms Armorer and Emergency Medical Technician (EMT-D). During his career as a police officer, he received over 20 police commendations, awards and distinctions for his service.

Mr. Fimbianti graduated from DePaul University College of Law in Chicago in 2001 and became an Assistant State’s Attorney in Will County. As a prosecutor, he handled DUI cases and felony offenses including murder, robbery, narcotics, and class X felonies. He also served as an ASA in the Grand Jury and Felony Review Section and worked as a felony narcotics prosecutor with the Organized Crime Unit. In 2005, he entered private practice as a senior partner in a law firm specializing in criminal defense, civil litigation, and family law.

ADVISOR TO POLICE AND PROSECUTORS OVERSEAS

In 2010, Mr. Fimbianti was selected by the United States Department of Justice to travel to southeastern Europe (the former Yugoslavia) as a contract advisor to the Republic of Kosovo and Bosnia and Herzegovina. In the Balkans, he spent 18 months assisting in the development of a practical criminal justice infrastructure and other essential Rule of Law institutions, with a special emphasis on enhancing the cooperation and teamwork among prosecutors and police officers.

Upon returning to the States, Mr. Fimbianti opened his own criminal defense and personal injury practice. His experience on all sides of the judicial system and abroad has afforded him a distinct perspective on the law. He ardently believes in the rights of criminal defendants as defined by the U.S. Constitution. If you are charged with a crime, you need a lawyer who will fight hard to protect your rights and freedoms, and never question the fundamental right that you are innocent until proven guilty, and that you must be proven guilty beyond a reasonable doubt.

Mr. Fimbianti has been a police officer and practicing attorney in the criminal justice system for over twenty-five years.  When he is not on the streets or in the courtroom, he has many interests. He is a lifelong avid powerlifter and Judo competitor holding two Indiana state masters records in the deadlift and bench press, as well as being a two-time Illinois State Judo Champion in the heavyweight blackbelt division.  He is also an active member of the Illinois State Archeological Society with special interests in ancient Rome and North American Paleo-Indian cultures.   Aside from his own personal hobbies, he enjoys spending time with his family.

If you need experienced legal representation, contact us to schedule a free, confidential, no-obligation consultation. We will answer your questions and give you an honest and accurate assessment of what you can expect from the legal system. We represent clients in matters in Will County, Cook County, and Kankakee County jurisdictions.