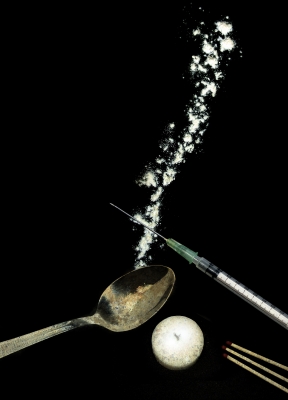 In late June a young man was taken to the hospital and his friend charged with “felony possession of a controlled substance, felony obstruction of justice/destroying evidence, possession of a hypodermic needle, and possession of drug paraphernalia,” according to Chicago CBS Local News.

Police were first alerted to the situation when a concerned citizen flagged down police outside of the Starbucks where the incident occurred, to report that a man had been in the bathroom for a very long time. The 21-year-old was taken to the hospital right away after police tended to him, and only afterwards did police notice that “the cellophane and tinfoil packets [containing heroin] were suddenly missing.” An anonymous caller tipped police off to search the 21-year-old’s friend, and when searching him they found a needle, two cotton swabs and a spoon in his shoe and the missing packets of heroin in his socks.

The incident occurred in Geneva, a relatively wealthy suburb of Chicago. According to a 2012 article in the Chicago Tribune, heroin use is a growing problem in the suburbs of Chicago. In 2011, there were six heroin deaths in Naperville alone, according to the Tribune. “Police say those who died ranged in age from 17 to 30,” according to the Tribune, and arrests for possession and use of the drug have been increasing. Kimberly Groll, an alcohol and drug addictions counselor from a Naperville clinic told the Tribune that, “heroin use often starts with other drugs like cigarettes and alcohol, moving into marijuana and prescription medication, then harder drugs like heroin.”

The friend of the man who was found in the bathroom, Tyler White, is also 21 years old. According to court records and Chicago CBS Local, “White is currently out on bail for an unrelated drug arrest that took place in April.” He’s also facing charges involving the possession of Ecstasy, “and manufacturing / delivering a controlled substance.” The latter carries the weight of a Class X Felony in Illinois.

If you or someone you know is facing drug charges, don’t go through it alone. Contact an experienced Chicago-area criminal defense attorney today.